From i3Detroit
(Redirected from IoT)
Jump to: navigation, search

We have begun an initiative to simplify the management of i3's space and infrastructure. The first step is bringing as much of the shut down procedure into a single button as possible. As it evolves things like networked thermostats that behave how we want, building out the new half of the space without having to wire lightswitches everywhere, putting the EV charger on the network for logging, and implementing SpaceAPI or SpaceDirectory all become possible (maybe even a version of RFID entry system). This page is made up of content moved from the #home-automation channel in slack. 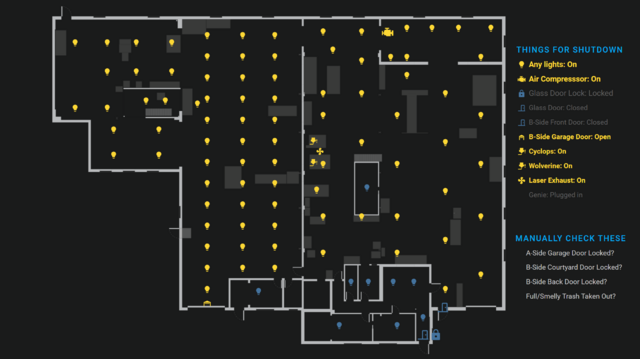 Most of the devices we have installed run a version of Tasmota that has been either had the settings tweaked before uploading or had a pin map added to the available options. Remember to bounce the power between flashing over serial and the first OTA attempt. Some of them are our own code creation using a template written by Mark Furland and mimic the MQTT format of the Tasmota devices for consistency. The repository is here: [1]

to get the IP address of each device, run this command

The hierarchy of our MQTT layout is mostly physical by design. It should be possible to publish/subscribe to more and more general sections of messages if you want to monitor different areas or control them. The <type> section came from Tasmota, previously we had wanted to put that at the end instead of the beginning which may have some MQTT benefits.

Right now the hierarchy we aspire to is:

Home Assistant is a home automation hub for connecting many IoT devices together into one system controlled by a web GUI.

OpenHAB (out of date)

We are no longer using OpenHAB, we have moved to HomeAssistant

OpenHab2 is a centralized method to manage multiple IoT devices from a Web GUI.

All issues tracked here: https://github.com/i3detroit/custom-mqtt-programs/issues Moving to that in progress

Write up, not hardware

Dash buttons 24-28 are set up but don't have things attached yet.

The following 46 pages are in this category, out of 46 total.