Proposal:
Make official the new kiln zone boundary to include the space from the current gate to the edge of the common area marked by the yellow line.
Moved by Matt Huber, Seconded by Leora Druckman
7 Ayes / 0 Nays
Result: PASS

Discussion about dishes left in the sing again


i3Detroit will not own non-disposable dishes for individual use, including plates, bowls, cups, and eating utensils. This measure neither requires nor prohibits the group from continuing to provide and replenish a stock of disposable equivalents. The group will continue to own non-disposable containers and utensils which are designed to dispense food or drinks to an entire gathering. Non-disposable dishes for individual use will be treated like any other abandoned property.

Board and Officer Attendance Expectations

Treasury and Budget Report for December, 2016

Financial Grade: A Emergency: $10K Checking : $7.0K Classroom 60% paid. 84 Subscriptions 12 annuals - Goal 100 total. Note that in prior months some may have been double counted if a subscription was re-activated. Slightly below planned dues in December. For December we exited with 130 members, 7 scholarships, 50 hiatus. 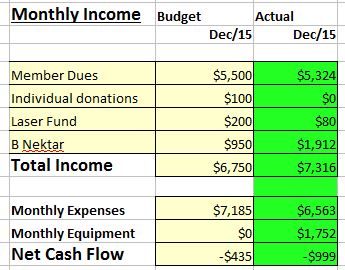 - Looking for outside vendors to come in and do various demonstrations.

- Design/3D Print signs for placement in challenged "Zones/Common" areas within i3. - There are a number of complaints about cleanliness. The first round of signs will target this issue. - Add periodic reminders of what how to be excellent is.

- Contacting Nate B. to setup a time for discussions and potential training on entering new memberships to the back-end of the membership system.

Four months have passed since the last email to the general membership, reminding them of the availability of the Member Advocate resource. So it's time for a new one. It will go out later this week.

Have orientation sessions so new members know how to find stuff.

Action Item: Charlie - Schedule a date to discuss how to reduce workload for membership on-boarding and help members to find information.